Archive for the tag “The Tablet”

As submitted to The Tablet, published 21 June 2014
“Abigail Frymann tries hard to present both sides of the narrative in her feature interview (“The rebels want my head”, 7 June) with Mother Agnes Mariam of the Cross. Sadly, in so doing she falls hook, line and sinker for the controversial nun’s take on matters inside Syria. The view that ‘the majority of anti-Assad fighters in Syria are foreign’ is presented as ‘widely accepted’, yet all reputable media outlets like The Financial Times and the BBC regularly report that whilst there are indeed now many foreign fighters inside Syria, they began in small numbers and only started expanding a year after the uprising began. Even now they account for less than 25% of the total opposition. Assad himself has of course brought in far greater numbers of foreign fighters – from the Lebanese Shia group Hizbullah and the Iranian Revolutionary Guard – to defend his own regime, but no mention is made of that.
Certainly matters ‘are not black and white’. But the ‘more complicated reality’ to which Mother Agnes refers is that Assad, under the guise of a general amnesty in early 2012, released al-Qaeda affiliated prisoners from his jails, knowing full well they would regroup and pursue their extremist ideology. Again, no mention is made of that. Now, two years later, the proof is before us, as ISIS, untargeted by regime airstrikes, was allowed to consolidate itself in Ar-Raqqa, from where it has swept into Iraq and taken large swathes of territory. Assad and ISIS should be mortal enemies ideologically – why is it that they have yet to fight each other?
The ‘reconciliation’ initative of which Mother Agnes is part, so loudly trumpeted by the Assad regime that well-meaning people like Mairead Maguire are fooled into nominating Mother Agnes for the Nobel Peace Prize, is a naked attempt to deceive the world that Assad is keen to forgive and forget. Had ‘reconciliation’ been his message at the outset in March 2011 instead of savage crushing of peaceful demonstrations, ISIS extremists could never have thrived on Syrian soil. As to her assertions on the chemical weapons attack,  Human Rights Watch has systematically dismissed the basis for her arguments.
Only when Assad, no doubt amply aided by Hizbullah and Iran, finally orders his forces to drop barrel bombs on ISIS headquarters, instead of on moderate rebel headquarters in Aleppo and Dera’a, will his narrative that he is fighting ‘extremism and terrorism’ become true. Maybe then we can nominate him for the Nobel Peace Prize.”
Diana Darke
Author of My House in Damascus, An Inside View of the Syrian Revolution 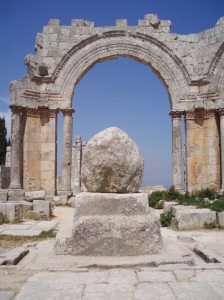 All that remains of St Simeon Stylites’ pillar in St Simeon’s Basilica west of Aleppo, thanks not to the current fighting, but to Christian pilgrims harvesting ‘souvenirs’ across the centuries [DD]