The principle of handwriting analysis

As fewer and fewer people write by hand, graphology, the analysis of handwriting, is something of a dying art. I qualified as a graphologist at the London-based British Academy of Graphologists in 2002 after a three year course and tough final written and oral examinations for which French examiners were flown over from Paris. The French have long been devotees and it is still widely used there in recruitment tests.

The key principle is that the unconscious elements in handwriting – spacing, continuity, flow, type of movement, pressure and stroke – come directly from the brain and therefore cannot lie or be disguised. That is why it gives such a useful insight into the true character of a person, his or her preoccupations, insecurities, drives and aspirations. People can superficially change their writing – as often happens in fraud cases – but a trained graphologist’s eye can spot the signs.

I have given Expert Witness statements on Arabic handwriting in a number of court cases in the UK and have also had extensive professional experience of Arabic handwritings while working in government and in commercial companies.  Bashar al-Assad’s “lies” have been a recurring theme in media coverage of the Syrian crisis. It seems he took in the majority of the international community, presenting himself as a modern IT-savvy leader with an intelligent and beautiful British-born wife. Through clever use of PR firms, including the British Bell Pottinger, he cultivated the image of a reformer, keen to bring progress and liberalisation to his country. 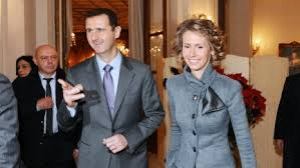 But gradually, as people watched how violently the Assad regime handled the 2011 uprising from the start, year after year, many came to realise that this image was false.

The same conclusion was reached by the new three-hour BBC2 documentary series A Dangerous Dynasty: The House of Assad after months of detailed research by the production team, together with scores of interviews with key players who knew him.

Handwriting analysis provides a way to get closer to understanding the psychology of this enigmatic man, to know whether he is weak or strong, a manipulator or manipulated, and above all whether he has the stomach to fight on.

In 2012 after months of searching, both online and by asking everyone I could think of who might conceivably be able to help, I finally tracked down a sample of Bashar Al-Assad’s handwriting. It was only his signature, as it appears on a legal document – Decree 49 dated 10/9/2008, a piece of legislation designed to make it impossible for Kurds in Syria’s northern border regions to buy or rent property, thereby aiming to drive them from their ancestral agricultural land.

But as a qualified graphologist with considerable experience of examining Arabic signatures, and also having come across some months earlier a sample of his father Hafez Al-Assad’s signature (from a book published in 1995), I was sure that I would be able to make a number of deductions and draw some potentially enlightening conclusions. A signature is the key to the writer’s inner life, showing his ability to realise his potential, his own evaluation of himself, his sincerity and the subconscious influences of his family background. I published an article comparing father and son in the May 2012 issue of the journal of the British Academy of Graphology: 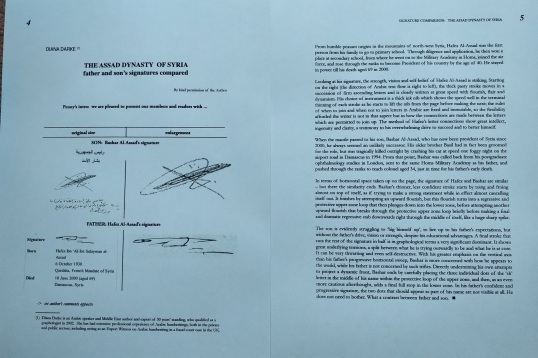 The contrast between the signatures of father and son was immediately striking. In fact the only area where they shared a similarity was in the horizontal space they took up on the page.  The father’s was written with a bold strong stroke and a progressive, upwardly rising movement. It was the signature of a true visionary, imbued with self-belief, drive and dynamism – all the more remarkable given his humble village origins and basic schooling. The son’s much thinner, less confident stroke could hardly be more different. It starts by zigzagging back and forth almost on top of itself, wasting effort and energy, lacking in direction and focus, as if trying to make a strong statement while in effect almost cancelling itself out.

This is one of the many signs of insincerity in the writing, along with regressive slant, unnecessary dots and exaggerated ornamentations. The regressive and descending movements indicate stubbornness and a denial of the present, an attempt to avoid what is coming. The signature finishes by attempting an upward flourish to aggrandise itself. But this flourish turns into a regressive and protective upper zone loop that then plunges down into the lower zone. It then tries again, attempting another upward flourish that pierces the protective upper zone loop briefly before plunging down in a final and dramatic regressive stab straight through the middle of itself, like a huge sharp spike or dagger.

The son is evidently struggling to ‘big himself up’, to live up to his father’s expectations, but without the father’s drive, vision or strength, despite his educational advantages. A final centripetal stroke of this kind that cuts the rest of the signature in half is in graphological terms a very significant dominant. It shows great underlying tensions, a split between what he is trying outwardly to be and what he is at core. It is self-sabotaging and self-destructive, the mark of a man who would even be capable of committing suicide, something his father or, for that matter, Saddam Hussein, would never have contemplated. [In 2003 I wrote an analysis of Saddam’s handwriting for The Times newspaper based on several letters he wrote from hiding which were published in Ash-Sharq Al-Awsat Arabic daily newspaper. The analysis showed his level of self-belief was such that he would never have admitted defeat, a conclusion that was borne out when, after capture and trial, he went to his execution in 2006 still insisting he was president of Iraq.]

With his greater emphasis on the vertical axis than his father’s progressive horizontal sweep, Bashar is more preoccupied with how he appears to the world, while his father’s energies were focused on achieving his vision. Directly undermining his own attempts to project a dynamic front, Bashar ends by carefully placing the three individual dots of the ‘sh’ letter in the middle of his name within the protective loop of the upper zone, and then, as an even more cautious afterthought, adds a final full stop in the lower zone, which signals his mistrustful attitude towards the world. In his father’s confident and progressive signature, the two dots that should appear as part of his name are not bothered with at all. His flourish is real, not an act.

In today’s Syria it is always Bashar’s face you see on both the pro-regime and anti-regime banners to proclaim either their loyalty or their opposition to the Assad regime. “Tel pere, tel fils” some of the protesters’ placards used to announce. But what this analysis of their signatures shows is that while Bashar may be the face of the Assad regime, he is far from being its backbone. That is the preserve of the innermost Assad clan – his mother, his sister and brother Maher. He is locked inside it and cannot break out – he would never dare.

The final episode of the BBC2 documentary series on 23 October 2018 showed Arabic documents smuggled out of Syria, bearing Bashar’s signature, signing off on clampdown orders from his newly established Crisis Management Unit in Damascus. They date from early 2012, four years later than my original 2008 sample. A comparison of the 2008 and the 2012 signature shows three important changes. The 2012 signature can be viewed here, in episode 3, at 28.38 minutes in, as BBC licencing protocol does not permit the image to be reproduced from the programme.

Firstly, one year into the war, it shows a more squashed and flattened shape, as if weighed down by pressures from above. Graphologically this is significant as it shows the expectations from what is known in psychology terms as the ‘superego’ – namely the pressures from parents, from society at large, weighing on him more heavily than in 2008. Interviewee after interviewee in the BBC2 series talked about the power and influence of Bashar’s mother, urging him to act more decisively, to maintain what his father, who ruled Syria for 30 years from 1970-2000, had created.

Secondly, the initial fast zigzagging to and fro has lost its energy and intensity. In 2008 the signature began with at least four fast movements back and forth. In 2012 there are only two, much weaker, slower strokes.

Thirdly, the final flourish is much weaker, flabbier, with the final downward stroke more like a limp piece of string than the sharp spike of the 2008 signature. His choice of a thicker nib gives the appearance of a bolder stroke, but the final movement is still regressive rather than progressive, the three dots from the ‘sh’ of Bashar are still cowering at the back of the protective shield he builds round himself for security, and the final full stop is still placed even behind that (remembering that the movement in Arabic is right to left, so the full stop, if used at all, would normally appear to the left not the right of the signature).

All this adds up to a picture of a deeply troubled man, struggling to carry on. Syrian state media is projecting him as victorious, as having won the war against ‘the terrorists.’ But psychologically, this is the most dangerous time for him, when he may let his defences down a little. His mother died in February 2016 so her influence is over. Were his wife Asma to die – she is currently suffering from breast cancer and looks extremely thin and ill –  would Bashar still have the appetite to continue as president of Syria? I wonder. Maybe he would take the early retirement he joked about when the French documentary maker in episode two of the BBC2 programme asked if he enjoyed being president. “Sometimes I get tired,” he said. And that was before the war.