Idlib Museum reopened last month after a four-year closure. It was an act of defiance, said the local Head of Antiquities, to show the world that Syria’s northwest province is much more than a “hotbed of terrorists” and “festering abscess”, as Russia’s Foreign Minister Sergey Lavrov has described it.

In the current political, diplomatic and military manoeuvring over Idlib, its history, culture and people draw scant attention. Yet it is important to understand the nature of Idlib as a province, its character and identity, because this gives clues as to its future. Before the war, the rugged uplands of Idlib, with an average altitude of 700m, boasted a number of holiday resorts, popular with city-dwellers, especially Aleppans, seeking escape from the summer heat.  Scenically it is one of the greenest regions of Syria, thanks to its cool rainy winters.

However, this mountainous terrain – with few urban centres – also makes it perfect guerrilla territory. Lacking oil and gas reserves, it still  has vital strategic value through its neighbouring provinces of Aleppo, Hama and Lattakia. It also controls the major northern border crossing of Bab al-Hawa into Turkey. A magnificent 1,200m stretch of paved Roman road still runs beside the main Aleppo–Turkey road, testimony to the importance of earlier trade routes in the region.

Idlib’s location, linking the coastal areas to the hinterland, means that two key highways, the M4 from Aleppo to Lattakia, and the M5 from Aleppo to Damascus, pass through it. Opposition control of the province has meant that both highways have been blocked since 2015, necessitating long detours on minor roads to connect Syria’s five biggest cities. The Syrian regime’s first priority will be to retake these trade highways.

As well as its mountainous limestone massifs Idlib also boasts the river valley of the Orontes, an exceptionally fertile low-lying plain known as the Ghaab Depression, where much of Syria’s agricultural produce is grown, such as wheat, cotton and potatoes. Over 100 waterwheels used to line the banks of the Orontes, invented in the fifth century to scoop up the river water and lift it into the adjacent fields. About seventeen still survive, most of them a little upstream in Hama to the south. The area remains self-sufficient in food and water today.

The Orontes is called Al-‘Aasi in Arabic: it means “the Rebel”, a name it earned by virtue of being the only river in Syria to run north instead of south, before reaching the sea near Antakya (ancient Antioch), now in Turkey. Agriculture still provides most of Idlib’s employment, and whole families can be seen working together in the fields at harvest time. The higher slopes are covered in olive groves, vineyards and fruit trees, especially cherries, the best in Syria.

Idlib’s remote hillsides have historically been the place to which rebels retreated in earlier confrontations with the ruling powers. In 1920–21 its mountainous uplands around Jebel Zawiya became the final stronghold for the Hananu Revolt, whose fighters were attempting to drive the French out of Syria with the help of Mustafa Kemal’s Turkish nationalist army. The revolt collapsed in 1921 after the Turks withdrew their support, but a low-level insurgency continued till 1926, a pattern that could repeat itself. Like today, the rebels had arms but lacked heavy weaponry, and were mainly Sunni Muslims, a mix of Arabs, Kurds and Turks, fighting against what they saw as the “infidel French” in defence of their homeland. A hundred years ago the French discovered, like Assad today, that pacifying northern Syria was much more difficult than quelling Damascus and the south.

Idlib’s rich and varied landscapes were also home to many earlier civilizations – Eblan, Hittite, Aramean, Assyrian, Greek, Roman, Byzantine and Arab. Scattered among its hills and plains are over 190 ancient tells (man-made mounds), tombs, castles, churches, monasteries, hermitages and other dwellings. Tell Mardikh, ancient Ebla, 3km east of the main Aleppo–Damascus highway, is Syria’s most important Bronze Age site, belonging to the country’s oldest civilisation from the third millennium BC, with its own Eblan language. Ebla means “white rock”, a reference to the natural limestone of its acropolis.

17,000 cuneiform clay tablets were discovered in 1975 by Italian archaeologists led by Professor Paolo Matthiae, who devoted his life to excavating the site and uncovering the city’s trade in gold, lapis lazuli and high quality woollen textiles. Many of the tablets were moved to Idlib Museum when it first opened in 1989. Security in Syria’s archaeological sites, never tight at the best of times, slackened even more after the war broke out in 2011, with illicit digs common in both regime and opposition areas. Ebla was violated by armed opposition groups, but the worst-hit victim was Apamea, when it was under regime army control from 2012–15. It is Syria’s largest classical site, four times bigger than Palmyra.  Satellite photography shows its 2km-long colonnaded street overlooking the Orontes Valley pockmarked with over 5,000 illegal digs. It lies just south of Idlib in Hama province and is currently under rebel control, within the Russian/Turkish demilitarised zone. 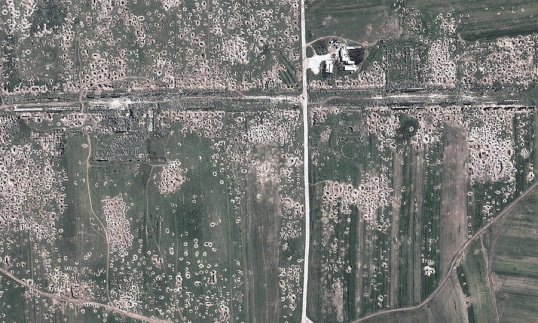 Further south from Ebla, halfway to Hama on the main highway to Damascus, lies the town of Ma’arret An-Nu’man. In 1098 it was besieged by the Crusaders on their way to Jerusalem and 20,000 Muslims, including women and children, were said to have been massacred and eaten. Raymond of Fulchre, the leader of the crusaders, wrote: “Our people were so frenzied by hunger that they tore flesh from the buttocks of the Saracens which they cooked and devoured with savage mouths, even when it had been insufficiently roasted on the fire”. Today the town’s cultural gem is a perfectly preserved sixteenth-century Ottoman caravanserai, the largest in Syria at 7,000m², built from indigenous black basalt. It was converted in 1987 to house a collection of stunning Roman mosaics moved from the nearby villas of rich Romans, but in 2015 the Syrian regime dropped two barrel bombs filled with TNT on the museum, causing extensive damage. The mosaics had fortunately been crated up and moved to the basement two months before. All such damage has been meticulously documented as it happened throughout the war by websites including www.apsa2011.com.

Arguably Idlib’s most significant cultural heritage monuments are the so-called “Dead Cities”, clusters of nearly 800 Byzantine stone-built settlements with over 2,000 churches dating from the fourth to the sixth centuries. They were renamed the “Forgotten Cities” by the Syrian Ministry of Tourism before the war. The wealth of these early Christian communities was based on wine and olive oil production exported to the Mediterranean via Antioch. The numerous olive and grape presses still to be found among the ruins testify to the strength of the trade, but wars disrupted the trade routes, causing the population to lose their livelihood and move west to the coast.

Among the most complete of these Byzantine settlements is Serjilla, in a hauntingly desolate spot between two hillsides, beloved by tourists for its pair of exceptionally well-preserved and graceful buildings –a public bath-house and an andron or men’s meeting hall. 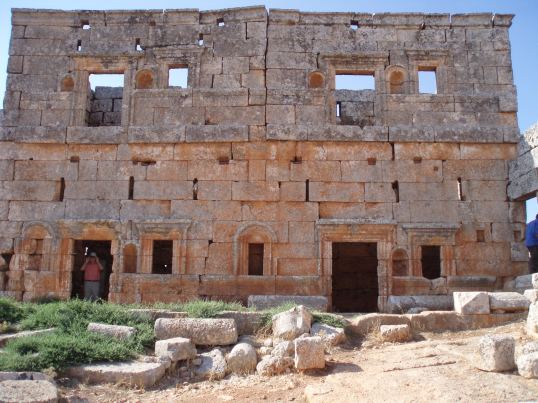 Nearby is Al-Bara, with five early churches and many Roman-style villas lived in by Crusader knights for a few years in the early twelfth century before they were driven out by the local ruling Ayyubids.

Without a doubt the most significant of the many churches architecturally is Qalb Lozeh, “Heart of the Almond” in Arabic. Standing high in the mountains west of Aleppo, at 670m, not far from Harem and the Turkish border, it dwarfs a small Druze village of the same name. Dated to c.640, the church is considered Syria’s finest example of Byzantine architecture and its design, with twin towers flanking a flamboyant arched entrance, is widely seen as the forerunner to what in Europe became known as the Romanesque style. 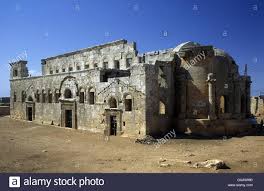 In the current war the Druze villagers, known for their fair hair and blue eyes, tried to remain neutral, but twenty of them were massacred in 2015 by extremist groups who regarded them as heretics. The demographic mix of Idlib has historically been overwhelmingly Arab with a few Kurdish and Turkmen elements, but today there are also foreign fighters from the Caucasus, Uzbekistan and Kyrgyzstan, as well as some Uyghur Chinese Muslims who control the Jisr Al-Shughour region on the main Aleppo–Lattakia highway.

The “Forgotten Cities” were declared a UNESCO World Heritage site in 2011, under the umbrella title “Ancient Villages of Northern Syria”, just in time for the war. There were well-advanced plans at that time, in which I was personally involved, for Syrian eco-tourism to be developed there. Visitors, it was hoped, would trek from site to site across the beautiful landscapes of Idlib, sleeping in friendly local homestays. Today it is a vision which seems impossibly remote.

If Idlib were to descend into the vortex of an all-out military offensive, the UN has warned it could be “the worst humanitarian catastrophe of the 21st century”. No one knows what will happen next, now that the 15 October 2018 deadline for the departure of extremist groups has passed. How long Idlib Museum – located in Idlib city centre – can stay open is anyone’s guess, but staff say they have a twenty four-hour plan to protect the priceless displays if war comes.

A version of this article was published on 13 September 2018 in The TLS online: