#Syria – Sidon and Damascus, Theatre of the Absurd in a Tale of Two Cities 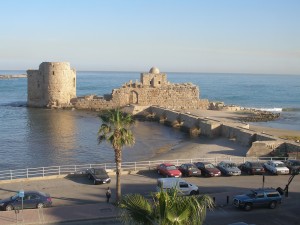 Sidon’s Crusader Sea Castle guards what was once the port for Damascus [DD, 2014]

Marwan, my chain-smoking Syrian lawyer, has left his war-torn country for the day to meet me in the Lebanese port of Sidon. He wants to complete some paperwork and tell me news from Damascus.

The Syrian accents at the tables all around us suggest he is not the only visitor. We sit with a view of Sidon’s Crusader Sea Castle and try hard to strike a holiday mood. He has brought magnificent gifts of Damascene produce – dried apricots, almonds and seed-covered biscuits.

He refuses a meal, even though the journey has just taken him six hours thanks to overcrowding on the border. His only appetite is for tea and cigarettes.

“What news of Abu Khalil?” I ask. Last time it was he, my elderly caretaker, who came out to meet me, so proudly braving the checkpoints from his village east of Damascus. But that was where the massive chemical attack took place last summer.

“He’s been blockaded in his village since October,” says Marwan. “It’s easy to get money to him. We give it to someone going in on the special buses. But food is impossible. The soldiers search the buses and throw away whatever they find.”

We almost laugh at the absurdity, but more absurdity follows.

Marwan asks me to sign the rental contracts for the refugees living in my Damascus house. They pay no rent, but this is vital documentation they must show when regime soldiers call round unannounced. Without it, arrest and imprisonment will follow. Each street is cordoned off in turn, each person’s papers checked, each room searched for weapons.

I ask about the checkpoints inside the Old City. “Are the lijaan sha’bia (peoples’ committees) still guarding the neighbourhood?”

“Yes,” he replies, “but now they are all either very old or very young. The young ones are easily recruited because of the salary. Their families are desperate for the income, so they agree to it, thinking their sons will be just round the corner. But sometimes the boys are transferred with no warning to the frontline, lambs to the slaughter. They come back to their families in a body-bag labelled ‘shaheed’ (martyr) with a pittance as compensation, but no one dares say anything.”

We cannot laugh, but both of us sense more absurdity, not least because of where we’re sitting. Sidon is in some ways a mini Damascus-on-Sea, a tinderbox just 40 minutes’ drive south from Beirut. There are photos all over town of one of Sidon’s most famous sons, the former Lebanese prime minister Rafiq Al-Hariri, who was blown up on Valentine’s Day 2005. Sidon’s buildings bear the scars of Lebanon’s own 15-year-long civil war. 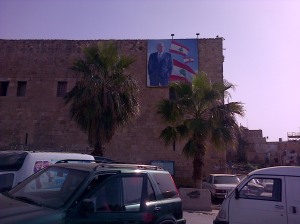 Banner of Rafiq al-Hariri adorns the 17th C Khan al-Franj, Caravanserai of the Franks, restored by the Hariri Foundation to be a craft centre and tourist office, now empty [DD, 2014]

Like Damascus it has a Sunni Muslim majority, a sizeable Christian minority and Palestinian refugee camps incorporated in its suburbs. The same blend of church towers and minarets rises from its bustling bazaars. But it also shares the increasing sectarian flare-ups, like the arson attack on a Sidon mosque that happened the very next day. The highly combustible city is surrounded on all sides by Hizbullah, the well-disciplined Lebanese  Shi’ite militia led by the cleric Hassan Nasrallah. We joke grimly about how in Damascus Hizbullah is considered not the enemy but the ally, openly fighting alongside President Bashar Al-Assad to keep him in power.

“God knows,” he says, “how Syria will ever get out of this swamp. Now the regime is preparing us for the June elections, being gentler with us at the checkpoints, announcing a policy of ‘musaalaha’ (reconciliation), freeing prisoners and doing deals to let people back into their homes in the suburbs. Their slogan is everywhere, ‘Bashar al-Assad ila al-Abad’ It’s a rhyme which means ‘Bashar al-Assad forever’.”

“How do you feel about going back?” I ask, when I have recovered.

“I have the female Russian teachers to look forward to, now that Russian will become our first language. Farsi will soon become our second, there are so many Iranians on the streets. And Hassan Nasrallah is billed as our saviour, side by side with Bashar on the posters.

Damascus feels safer to me than Sidon!” Marwan insists. And he explains, “The regime’s control is so tight, nothing can happen there. Sidon might explode. Damascus cannot. The regime has taken out the fuse!”

Sidon’s old souks are indistinguishable from the souks of Old Damascus [DD, 2014]

Interior of Sidon’s Great Mosque, formerly Church of St John of the Hospitallers. Damascus’s Great Mosque was formerly the Cathedral of John the Baptist. [DD, 2014]

Entrance to Sidon’s Great Mosque, once the Church of St John of the Knights Hospitaller, restored by the Hariri Foundation and winner of the 1989 Aga Khan Award for Architecture [DD, 2014] 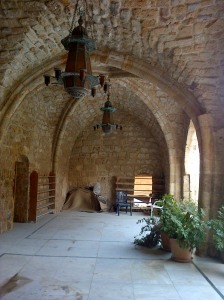