Bricking up the 13th century prayer niche of the Halawiye Madrasa, Aleppo

Little known and little recognised, groups of Syrians inside Syria are working together to try to save the destruction of their country’s cultural identity. Confronted with the inertia of the international community, the occasional statement and handwringing from UNESCO and the Syrian government’s own narrative presenting itself as the custodian of the country’s rich treasures, these groups are taking matters into their own hands. A mix of academics, archaeologists, students and ordinary citizens with a deep love for their country, they have almost no funding and most are volunteers.

Protecting the tomb of the Prophet Zachariah, inside the Aleppo Great Mosque

A recent study (by Heritage for Peace see link below) has shown that 38 organisations are involved worldwide in efforts to highlight the damage to Syria’s cultural heritage, including the big names like UNESCO, Blue Shield, the Global Heritage Fund, the World Monument Fund, ICCROM and ICOMOS. The overwhelming majority are talking shops, gathering data and posting it online. They are largely based outside Syria and function only through the official channel of the Syrian Directorate-General of Museums and Antiquities (DGAM) which in turn only functions in the regime-held areas of the country. Of these 38 organisations, 14 have been formed since 2011 specifically in response to the Syrian crisis, mainly from volunteer groups. Only six of the organisations are Syrian, working on the ground inside the country, and of these only three that we are aware of are taking pro-active, pre-emptive measures to protect ancient buildings. It is a chronic state of affairs, but such is their commitment to doing whatever they can that they are prepared sometimes even to risk their lives in order to protect and save their cultural identity.

Aleppo, once Syria’s largest and richest city, is where such actions have been most prevalent. The Division of Antiquities of the Free Council of Aleppo was founded in 2013 and has sandbagged and walled up the precious sundial in the Aleppo Great Umayyad Mosque, and bricked up its shrine of the Prophet Zachariah. With the help of the Tawhid Brigade from the Free Syrian Army, they have dismantled its 12th century wooden mihrab for safe-keeping away from the front line.

The Syrian Association for Preserving Heritage and Ancient Landmarks was founded in Aleppo in 2013. Its members, many of them archaeology students from Aleppo University, at considerable risk to themselves, saved the stones from the fallen minaret of the Great Umayyad Mosque and have put them safely elsewhere awaiting reconstruction after the war. They also helped the Free Council of Aleppo with protecting the sundial and removing the mihrab.

Protecting the sundial in the courtyard of the Aleppo Great Mosque

The Association for the Protection of Syrian Archaeology (APSA) was founded in 2012 in Strasbourg by a group of Syrian archaeologists and journalists. Together with collaborators on the ground they have compiled an extensive website cataloguing the damage (www.apsa2011.com) and have also held short workshops in Turkey’s Gaziantep to train Syrians in techniques of how to record damage and how to carry out simple protection measures. 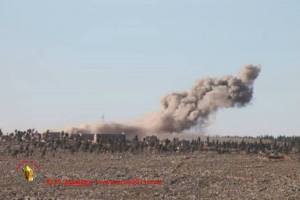 An APSA team goes to document the damage at the Dead City of Shanshara, part of the UNESCO World Heritage site inscribed in June 2011, near Al-Bara and Kafaranbel, Idlib Province

All of this work goes unrewarded financially and unrecognised internationally. Syria’s concentration and range of cultural heritage sites far exceed that of neighbouring Iraq. Yet while Iraq benefited from a UN resolution in 2003 after the US invasion banning trade in its antiquities, the Syrian case has been largely ignored, complicated by politics. Stepping up to the challenge, the Global Heritage Fund UK has recently agreed to help by acting as a channel for funds for anyone who would like to help support this work. The sums involved are small by the standards of international organisations. But international organisations like UNESCO cannot operate inside Syria without the permission of the Syrian government – a permission which has not been forthcoming.

APSA is looking to raise £32,000. So far they have raised £6,400. If each of the 624,000 people who clicked to view the recent BBC feature highlighting the problem (see below) had been able to contribute just £1, the target could have been met 20 times over.

Anyone who would like to do something tangible to help can contact cgiangrande@globalheritage fund.org, or use the donation form below. Even small amounts will make a huge difference. Handwringing and nostalgia, alas, do not.