Archive for the tag “Dabiq”

Syria’s War reaches the most dangerous point so far 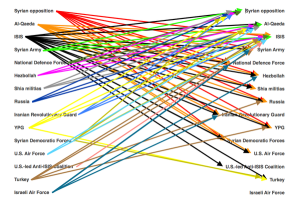 No one seriously believes the ‘postponed’ peace talks at Geneva 3 will take place on 25 February 2016 as scheduled by the UN’s Syria envoy, Staffan De Mistura. Like his two predecessors, Kofi Annan and Lakhdar Brahimi, both of whom resigned in despair, De Mistura is trying to lead a peace process backed only by the impotence of the UN and its increasingly violated and empty resolutions. While Ban Ki Moon and others express outrage about ‘unacceptable’ behaviour, the realities on the ground are making political and diplomatic posturing irrelevant.

Russia’s unprecedented air bombardment began on 1st February, as the talks in Geneva were trying to splutter into life. With no warning hundreds of bombs were rained down on rebel-held territory north of Aleppo, displacing thousands of families from their homes. Two days later De Mistura suspended the peace talks, exactly what Russia wanted. Intensifying their momentum, the Russian airstrikes within days went on to ‘liberate’ the Shia pro-regime villages of Nubul and Al-Zahra and push north towards the Turkish border at Kilis.

Chief losers in this ongoing battle are what remains of the armed opposition north of Aleppo, the 70,000 displaced families now stuck either in the town of A’zaz or in the no man’s land between the Turkish and Syrian border at Bab Al-Salama. 500 people have lost their lives since the Russian airstrikes began 10 days ago.

Chief winners are the Russians, the Iranian Republican Guard and Hezbollah fighters battling on the ground alongside what remains of the Syrian Assad army, now so depleted by deaths, defections and draft-dodging that it is but a shadow of its former strength.

But the biggest winners of all are the Syrian Kurds, the PYD whose efficient fighters were perfectly placed in northern Syria to take advantage of the Russian bombardment. As the areas were depopulated they moved in to increase the territory of their semi-autonomous region of Rojava. They have made huge progress since 2014, as the maps below show, and now control close to 20% of Syria, consolidating their hold on their three cantons. Their dream is to link up the western canton of Afrin with the two eastern cantons of Kobani and Jazira, currently separated by a tract of lawless land between A’zaz and Jarabulus controlled partly by ISIS, partly by Turkmen and Arab rebels. 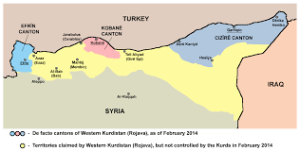 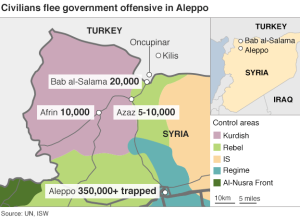 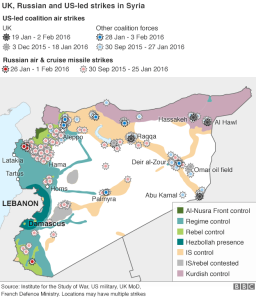 But all this is a nightmare for Turkey, not only because President Erdogan regards the Syrian PYD Kurds as an offshoot of the Turkish Kurdish militant PKK group, but also because the US under the Obama administration has in recent days even sent a delegation under Brett McGurk, the US’s special envoy to the anti-ISIS coalition, to visit Rojava, and has pronounced them not terrorists but allies in the fight against ISIS.

Erdogan is furious, accusing his supposed ally America of self-interest and betrayal. Even worse, Russia is arming and training the PYD Kurds, so both Russia and the US are together supporting Kurdish aspirations.

Will he be able to contain his rage and not send in Turkish troops to challenge Russia, Iran, Assad and the Kurds? Is he prepared to lose control of his whole southern border to a new Kurdish entity? Will Saudi Arabia (and the UAE and Bahrain) make good on its offer to send 150,000 ground troops onto that same patch of disputed land?

The thousands of displaced refugees now building up on the Syrian side of the border may give him that chance, to enter Syria on a humanitarian ticket and create the safe zone he has wanted to set up since summer 2011 but which was never supported by NATO and the international community. Up to 400,000 additional refugees could flee from Aleppo itself and add to the thousands at the border if the city, once Syria’s biggest, is encircled and put under siege.

Turkey’s position today is stronger than at any previous time in this five-year war, because of its powerful role in controlling the flow of migrants into an overwhelmed and vulnerable Europe. Erdogan’s AK party won a convincing election last November. But Turkey’s position is also more dangerous than ever before. Setting up a safe zone four and a half years ago would have been child’s play compared to now, when so many external actors are involved. ISIS did not even exist then. But the threat of ISIS pales into insignificance compared to the danger of Turkey and Russia sparking a confrontation in exactly the territory around Dabiq, where ISIS propaganda tells us the stage is set for Armageddon.

Syria’s war, after five years of unexpected twists and turns, is now way out of control, with a dynamic all of its own. No single state or actor, or group of states can dictate its course, not even Russia. Putin may consider himself invincible but even he cannot control what happens next inside Syria. As each day brings new escalations and dangers the spectre of World War III no longer seems like a far-fetched threat. How much worse can it get?