Of Syrian Sheep and Goats

Sheep in their flock

In December 2017 London’s Royal Court hosted a new play called Goats’ by Syrian Liwaa Yazji. The Times Literary Supplement asked me to review it. This is what I wrote, published in print and online on 13 December 2017:

The Royal Court describes itself as “the writers’ theatre,” staging “restless, alert, provocative theatre about now”.  This unusual play certainly fits that bill, its Agitprop style echoing Brecht’s ‘Mother Courage’, one of the greatest anti-war plays ever written. Like Brecht, Yazji uses Verfremdungeffekt to create a deliberate distance between the audience and the actors, seeking to make them focus on the issues rather than empathise with the characters. Brecht was frustrated by the critics’ response to ‘Mother Courage.’ The audience sympathised with her suffering, the loss of her children, one by one, to the war, but what Brecht said he intended was to show how misguided she was to believe she could earn her livelihood from the war. Yazji must be feeling very similar, for the interval chatter made it clear that the audience connected primarily with the live on-stage goats.

The play is surreal on so many levels it’s hard to know where to begin. The setting is 2016, a snapshot of a typical regime-held village in southern Syria five years into the current conflict. It is not, and never has been, on the frontline of the fighting, but the play opens with a neat row of coffins laid out on stage, each decorated with the photo of its occupant, a young soldier in uniform, killed fighting ‘terrorists’ somewhere else in the country. It is the weekly mass funeral, an event that has now become routine, but which has to be televised for the nation, to ‘honour the martyrs’, using a vetted script read out by the chairman of the local Ba’ath Party branch office. Suited security personnel are in attendance to make sure everything goes to plan, while a hard-as-nails female TV presenter, all hair and teeth, interviews the relatives, also to a fixed script.

Throughout the play there are three TV screens on stage simultaneously playing footage of these and other funerals, interspersed with programmes about villages being liberated, an ‘Everything is fine’ strap-line and occasional white-noise explosions. Such techniques are reminiscent of Brecht’s use of placards, as is the unflinchingly bright stage-lighting irrespective of whether it is night or day, adding to the sense of the surreal. Sometimes the stage is littered with looted fridges, war booty stolen from opposition homes.

The Ba’ath Party, sensing the rising unease of the villagers, has the brainwave of compensating the martyrs’ families with a goat, a token of the state’s esteem and respect for their loss. This is beyond surreal, especially because during the Arab Spring, artists have often used the goat, with its naturally curious and independent character, to represent the rebels, the protesters, as opposed to the compliant sheep who do as they are told and flock together.

Cartoon by Syrian Ali Ferzat, showing sheep carrying placards with “Freedom” in Arabic, as they follow a heavily weaponised thug.

The young men of the village relieve their tensions by fornicating with the goats, and question what the point is in going to school if they are soon going to be sent off into the army anyway. ‘Won’t it be over by then?’ asks one. ‘Like hell it will,’ replies another. “There might be another ten years of this,” says a third.

The key protagonist is Abu Firas, the local schoolteacher, whose son is supposedly inside one of the coffins. He insists on seeing his son’s body so he can be sure he is dead – he is finally departing from the state-controlled script. “Enough of this madness!” he shouts, in the middle of the ceremony. “You’re scared of me. Why?” he yells at the Ba’ath Party official, “Because now I have nothing left to lose. In a country like this, that is the most dangerous thing!” He starts to question: “Why don’t any of our boys come back wounded, why only dead?” and jokes bitterly “Thank goodness our sons don’t realise they’re only worth a goat.”

As his defiance grows, the realisation dawns that his son was brainwashed into the ‘martyrdom mentality’ and the leitmotif of the play becomes clear – overcome with regret for not speaking up against the regime’s tactics all these years, he howls: “I missed my chance!” One of the young boys agrees, reproaching him: “You’re the originator – you and your whole fucking generation!” A mother grieving for her elder son refuses to speak. “This is not the time to stay silent,” Abu Firas reproaches her, “Do you think your silence will change anything?” Her younger son, who has run away from the army on her instructions, also reproaches her: “When I turn into a goat, will we be able to talk to each other?”

This very real generational divide within the war is rarely focussed on, in literature or in the media, but it is certainly the case that many of the old blame themselves for staying silent too long, while the young blame the old for landing them in this mess, for acquiescing in the regime’s methods all their lives rather than challenging the system. “Did I kill Firas?” the father wonders by the end. In despair he hangs himself, a schoolteacher who has failed in his duty to educate the young.

Most surreal of all is the audience’s reaction to the play. “We open our doors to the unheard voices and free thinkers that, through their writing, change our way of seeing,” states the Royal Court Theatre blurb. The audience looked but appeared not to see.  “The goats are the real heroes” laughed some, while others declared that the goats stole the show, and were better than the actors. Yazji lays bare with chilling accuracy the horrific realities of the Syrian war, how it has brutalized families and a once-cohesive Syrian society. But an ongoing war of these proportions, where over half the population has been displaced, disabled or killed, is so far removed from a London audience’s comfort zone, that it can’t relate to the message – only to the goats. Yazji, like Brecht, may have to wait a few generations before the enormity of the Syrian war – and her play’s attempt to bring this home – will be better understood. 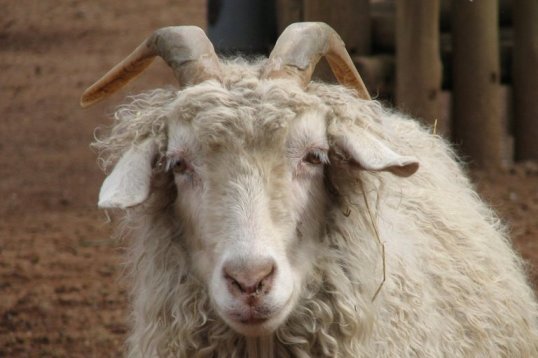 3 thoughts on “Of Syrian Sheep and Goats”