Russian state television has not been showing pictures of the victims, lifeless or still writhing, which have been flooding Western media channels since the sarin gas attack of April 4 on Khan Sheikhoun, a town between Aleppo and Hama. After all, Russia is supposed to be the guarantor of the deal under which President Assad of Syria signed up to the international treaty banning chemical weapons. Under threat of US military action, he quickly agreed to the removal and destruction of his stockpile, declared at 1,300 tonnes of chemical agents including sarin.

The deal was hailed as a great success. The international community congratulated itself on the historic Russian/American cooperation. That was back in 2013 after Obama’s notoriously illusory “red line” was crossed by the Syrian regime dropping sarin on the agricultural eastern Ghoutasuburb of Damascus. 1,500 died overnight. Only twice in history had sarin been used before this week: first in Halabja by Saddam Hussein on the Kurds in 1988, the second in Japan in 1995 by a new religious movement on the Tokyo subway. There have been nine recorded chemical weapons attacks in Syria this year alone, but this is the first where the agent has been sarin as opposed to chlorine, mustard or phosphorus. This time around 100 were killed, most dying from suffocation before they reachedhospital. Doctors Without Borders confirmed the signs – constricted pupils, muscle spasms and involuntary defecation – as have autopsies carried out by WHO and OPCW officials on corpses rushed to Turkey. Israeli and British intelligence report that the attack was ordered at “the highest levels” of the Assad regime. It comes hard on the heels of a spate of documentaries about the “disappeared” in his prisons and the decision of a Spanish court, last week, to file a case against some of his top officials for war crimes.

Sarin is not easy to manufacture, say the chemical weapons experts. If, as the Assad regime claims, Isis or al-Qaeda-affiliated groups have the capability to manufacture it, why have they not used it, given they are not known for their restraint? The sarin is likely to be from old stockpiles not surrendered – 200 tonnes’ worth is the current OPCW estimate. Anyone who knows the Assad regime and how it operates can assume that it held some back as a “contingency”.

Khan Sheikhoun is in Idlib Province where the rebels and their families, all labelled “terrorists”, have been herded into a giant corral awaiting their extermination. It was the option they chose after being forcibly evacuated from areas like Homs, Darayya and most recently Aleppo and Wadi Barada under what the regime calls “reconciliation” deals. Almost everyone rejected the alternative on offer – to rejoin the regime and face a similar fate, but this time as cannon fodder for their own side. Madaya, Zabadani and Douma are next in line. So many of the victims are among the newly displaced that not all their identities have yet been established. Idlib has been targeted so heavily and for so long that its medical supplies were utterly unequipped to deal with something of this scale. Already there are rumours of a mass offensive on Idlib Province planned by the Assad regime, backed by Russia from the air and the Shia militias of Iran, Iraq and Lebanese Hezbollah on the ground. The sarin attack is thought to have been conceived as a “softening-up” of the rebels in advance of this offensive. Dropping a sarin bomb is a way of extracting an early surrender, just as the US dropped the atom bomb on the Japanese to end the Second World War.

But it is Trump who has stunned the world with the speed of his reaction. Up to now his policy has been that strongmen are the best thing for the Middle East, to keep extremism at bay. Overnight he has swung US policy from tolerance of Assad to outright attack, launching fifty-nine cruise missiles from US warships in the eastern Mediterranean. The target, totally destroyed, was the Shayrat airbase near Homs from which the sarin attack was launched. Six Syrian soldiers were killed. He has done some “softening-up” of his own.

What next? Will he make good on “beautiful big safe zones”? Does he have plans for one in the huge swathe of Syria’s eastern desert that will fall to the West when Isis is driven out of Raqqa?  Or in the north along the Turkish border, something the Turks have been calling for since the summer of 2011? He could take out all Syria’s air bases in a matter of days if he wanted to. He would not target the Russian base at Hmeimim, Lattakia, leased in January of this year to Russia for forty-nine years, extendable for another twenty-five. No short-termism there. But Russians embedded in Assad’s bases, as advisers, engineers and even as contracted mercenaries, could still be killed, just as some were in the recent coalition bombing of Deir ez-Zor. 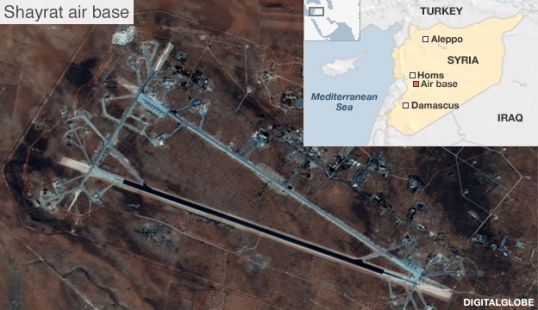 The Americans have already intervened in favour of the PYD (Syrian) Kurds, using them as their preferred ally over Turkey to lead the fight against Raqqa, the Isis capital. The Kurds have also been courted by the Russians, granted an office in Moscow, in the full knowledge that through them Russia might gain a valuable land bridge from the Caspian to the Mediterranean. Turkey is determined to block Kurdish ambitions for autonomy, fearing the consequences for its own restive Kurdish population in southeast Anatolia. One in five Turks is a Kurd, a balance that is tilted in Kurdish favour through ongoing high birth rates. For a short time it looked as if President Erdoğan had given up on his long-held policy of ridding Syria of Assad, but after the sarin attack he has reverted, declaring: “Hey, the world that remains silent, the UN that remains silent. How will you be brought to account for this? Hey, murderer Assad, how are you going to escape their [the victims’] curse?”

Timings are never random in the Assad regime. The fact that the strike came the day before the EU conference on reconstructing Syria is no accident. Assad was pushing the boundaries, laughing at the world’s impotence and revelling in his own immunity. The Brussels conference was planning to kick-start reconstruction quickly, hoping the promise of funding would lure him into reforms. Any attempt to rehabilitate Assad and “reward” him for his war crimes will simply be like a sticking plaster to cover a running sore. While short-sighted European governments looking for a quick fix may see this as the answer for tomorrow, it will not be the answer for next week. If reconstruction contracts flow in from Europe and the UN organizations via the Assad regime through the usual corrupt channels to enrich and favour regime-held areas, the same corrupt cycle will repeat itself in Syria as it did so tragically for the exploited people of Somalia and South Sudan.  Assad’s budget is heavily dependent on UN and international NGO aid, much of which disappears into companies affiliated with Assad’s relations, as investigative journalists have shown. If the gap between rich and poor, urban and countryside, a major trigger of the 2011 uprising in the first place, is allowed to get worse, the result will be more extremism, more refugees and more terrorism, leading inevitably to more destabilization in Europe.

It has always been delusional to think that Assad could be part of the solution to the future of Syria – the best outcome from this sarin attack would be that his arrogance has derailed his own rehabilitation. That at least would be a first step in the right direction. Meanwhile Trump’s decisive action will stop sarin attacks from becoming the new normal in the Middle East.

This article first appeared on the TLS website 7 April 2017: