On 22 November 2019 I gave the annual John Martin lecture to the British Society of Turkish Area Studies (BATAS) at Regent’s University, London. My chosen title was ‘Turkey and Syria: deep past connections and deep present differences’, picked months earlier in order to focus attention on what had been, in my view, the long neglected border between Turkey and Syria. Little did I know that it would become, just weeks before the talk, the focus of worldwide attention after a phone call between President Trump and President Erdogan on 6 October 2019. The call was quickly followed by two connected events – the sudden US troop withdrawal from northeast Syria and Turkey’s incursion into Syria to create a long-demanded 30km deep safe zone along the border.

Originally agreed by the French and the new Turkish Republic after World War I, much of the border follows the course of the Berlin to Baghdad railway. A vastly long 822km line running from the Mediterranean eastwards, it crosses the Euphrates River and ends in Syria’s northeast corner where the Tigris River forms the border with Iraq.

It is an area I know well, having visited southeastern Turkey regularly since the late 1970s when first writing and then updating my Bradt guides to Eastern Turkey and to Syria. In fact it was where my feet first touched Turkish soil, after crossing from Syria at the Bab al-Hawa border post in my ancient Citroen 2CV. I therefore discovered Turkey ‘backwards’, entering from the east. At that time Syria was the safe haven, Lebanon was in the grip of civil war (I had just been evacuated from MECAS, my Arabic school in the hills above Beirut) and most of eastern Turkey was under martial law.

To give an overview, I began the lecture by showing a series of historical maps of the region, starting from Ottoman times, when there were no physical borders, only administrative boundaries for tax purposes. The maps showed how, after World War I, what had been the Ottoman province of Syria gradually became smaller and smaller, losing Jerusalem, Gaza and Nablus to Britain in the south, losing Lebanon to a separate state created by the French, and losing the Sanjak of Alexandretta (Hatay) to Turkey in 1939. Syrian maps to this day still show Hatay as part of Syria, since the land transfer by the French was in clear breach of the terms of their Mandate. 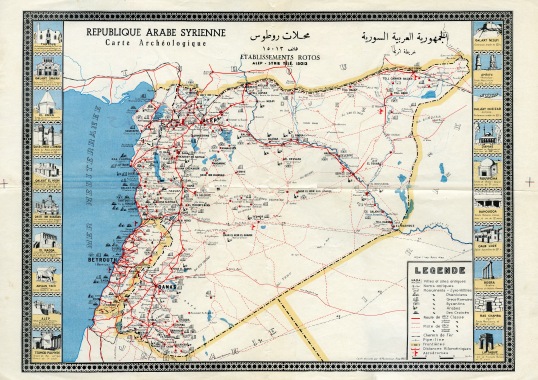 Perhaps the least known historical map, and the one most relevant to today, is the one I discovered in the Institut Francais du Proche-Orient in Damascus, which shows the religious and ethnic groupings inside Syria and Lebanon. It was compiled by the French Mandate authorities ruling the region in 1935, and it marks the areas inhabited by Kurds along the Turkish border. These Kurds arrived after World War I as refugees from Mustafa Kemal’s new Turkish Republic. Non-Turkish minorities who stayed in Turkey were obliged to assimilate into a new all-Turkish identity and forgo their own cultural identities, so many left, either voluntarily or forcibly. The Kurds who crossed into Syria were later granted Syrian citizenship by the French Mandate authorities, only to have it taken away again by the Ba’athist government in 1962, which left 300,000 of them stateless, known as ‘bidoon’ (Arabic for ‘without’). President Assad of Syria hastily announced he would grant them citizenship in reaction to the 2011 uprising against him, but the UN estimates there are still 160,000 stateless Kurds inside Syria and that the remainder have mainly left the country.

This 1935 French map also clearly shows that the area in which Turkey has now created its ‘safe zone’, the stretch between Tal Abyad and Ras al-Ain, was historically a Sunni Arab and Turkmen dominated region, a fact well known to Turkey and which is why it chose to begin its ‘safe zone’ operation here. Kurds settled there only since 2012 during the Syrian civil war, often displacing the original Sunni Arab population, as part of their push for an autonomous Kurdish region here – what they call Rojava, meaning ‘Western Kurdistan’. These Kurds belong to the PYD, the strongest of the seven main Syrian Kurdish political parties, founded in 2003. Though it seeks to deny such links today, the Syrian PYD is so closely affiliated with the Turkish PKK Kurdish political separatist party that it was commonly referred to as its Syrian wing. When the Assad regime army quietly withdrew from these border regions in 2012, the PYD were quick, as the best organised Kurdish group, to take their place, and have also kept lines of communication open to the Syrian Assad regime, which continued to operate Qamishli airport and to pay local salaries for civil servants and teachers.

Both the Syrian Kurdish PYD and the Turkish Kurdish PKK parties follow the ideology and teachings of the jailed Kurdish PKK leader Abdullah Öcalan, a fact that is made clear by his face appearing outdoors in flags on the battlefield and indoors in PYD office buildings.

In my lecture I considered the historic unity of the region, as revealed by the shared architecture of cities like Aleppo and Gaziantep built under the same Ottoman governor, shared trade, and the shared geography of the Fertile Crescent, where dams on the Euphrates have turned deforested plains into productive fields of cotton and wheat. Next I explained about the pockets of Christianity that straddle the border, looking at monasteries that have been newly established on old foundations by Syriac monks like Father Joachim of Mar Augen, on the ridge above Nusaybin in Turkey, looking out over Qamishli in Syria.

Many Syriac communities and other minorities found refuge here after escaping from the Sayfo massacre by the Kurds in 1915. When I had first visited Mar Augen in the 1980s the ruins were being lived in by a Yezidi family.

Before the current Syrian war, the border was very open and easy to cross. There were no visa requirements for Syrians and Turks to cross into each other’s countries, and as a result, many Syrians holidayed in Turkey and vice versa. President Erdogan and President Assad even holidayed together, in a symbol of these close ties.

But this porous border became a problem once jihadi fighters of all nationalities, including Europeans, started crossing it to join ISIS in its newly-proclaimed caliphate based in Raqqa, on the Euphrates in eastern Syria from 2013 onwards. Assad saw Raqqa as a provincial backwater and ignored the rise of ISIS there. Erdogan also underestimated what ISIS would become and was accused of turning a blind eye.

The four-month battle for Kobane in September 2015 was the turning point, when US fighter jets teamed up with PYD Kurdish fighters on the ground to expel ISIS from the city – the US/Kurdish coalition was born. Erdogan protested loudly from the start about this alliance between America and the Kurdish separatists it has considered terrorists since the 1980s when the PKK first began a long-running guerrilla war against the Turkish army in which 45,000 lives were lost. The PYD, in an effort to legitimise themselves in the eyes of the outside world, formed the Syrian Democratic Forces (SDF) by recruiting some local Arab and Syriac fighters, but it was always Kurdish-dominated. To help understand, consider for example what would happen if Basque separatists, regarded as terrorists by the Spanish government, were to team up with the French army to defeat a group like ISIS. Spain would no doubt have been equally vocal about its displeasure from the outset.

In other words, the current problem that countries like France have with fellow NATO member Turkey’s actions against the PYD Kurds was foreseeable from the start. Turkey was willing to use its own army, but France and others in the US-led coalition against ISIS took the short term, expedient method of fighting ISIS using PYD Kurdish boots on the ground who were already there and only too willing to partner with the US and its allies. These PYD Syrian Kurds wanted to defend their Kurdish majority cities like Kobane and they knew it would play well to them and their image in the long-term, if they were seen to be reliable partners against ISIS.

They also showed themselves to be experts in PR, campaigning in Moscow, in Washington and in European capitals for support of their Rojava project – PYD offices abroad have opened in Moscow, Prague, KRG Sulaymaniyah, Stockholm, Berlin and Paris. Photo features on their Kurdish Kalashnikov-wielding female fighters have appeared so often in the western media that you could almost be forgiven for thinking the female fighters defeated ISIS single-handed. Rarely mentioned is that many of those female fighters were on the battlefront to escape patriarchal domestic dominance, notoriously prevalent in Kurdish society with its ‘honour killings’ and blood feuds. Some women have even set up all-female villages where they can live freely away from their controlling menfolk. Fighting ISIS offered an escape route.

In this highly complex and combustible situation along the Turkey/Syria border, everyone is fighting for different reasons, driven by conflicting aims and beliefs. When it was first formed after the dismantling of the Ottoman Empire by the Allies, this new border between modern Turkey and Syria was porous and easy to cross, and remained so till very recently. But in late 2014, largely in response to European criticism that it was allowing ISIS fighters to cross into Syria without checks, Turkey began construction of an impenetrable 3m high concrete security wall along the border, topped with razor wire. The EU funded the construction, according to German Der Spiegel, keen to protect itself from ISIS.

Today it is complete, the third-longest wall in the world after the Great Wall of China and the US-Mexico border wall. The communities that once straddled it are now divided permanently, for the first time in their long and interwoven history. Such barriers, as has been amply demonstrated in the past, erected as short-term solutions to complex problems, have a way of creating long-term obstacles to peace as well as to people. NATO’s future is at stake, so a well-coordinated, long-term solution must be found.