Dreams of a better #Syria 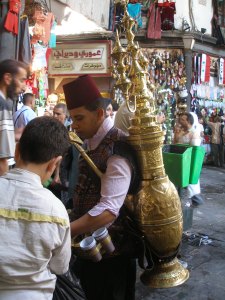 Review as published in The Times Literary Supplement June 20, 2014 by Gerald Butt

“Diana Darke’s My House in Damascus: An Inside View of the Syrian Revolution is written with the pace of a novel and the colour of the best travel writing. The book hangs on the author’s purchase and refurbishment of a house with a courtyard in the Old City of Damascus in 2005 – and all the insights that the legal and bureaucratic battles gave her into Syrian society, echoing in this sense Lawrence Durrell’s Bitter Lemons. But the book offers much more than a personal memoir: it is an eclectic but learned encyclopedia of Syrian history, of the Arabs and their language and traditions, of Islamic art and architecture, and more.

Darke, fluent in Arabic and an authority on Syria, befriends Syrians who, well before 2011, are surviving as best they can in an atmosphere of fear, of “plainclothes policemen, the dreaded mukhabarat, looking grim and brutal in their black leather jackets”. A Syrian tells her: “You must understand. They can arrest me any time they want, throw me in prison. My family would never even know where I was or whether they would ever see me again.”

In the face of such repression, one can understand why the revolution against  Ba’athist rule erupted. But that does not make it easy to predict how it will end. Some of the most insightful passages of Darke’s book describe the dilemma faced by the silent majority of Syrians whose views are least represented in the foreign media. They feel unable or unwilling to choose between the two extremes on offer: the regime or the rebels. This partly explains why, she writes, so many Syrians felt compelled to flee the country: “Had there been a moderate alternative in the middle, a carrot so obviously juicier and bigger than the others, all parties would surely have chosen it long ago.” Instead, the distance between the two extremes is growing. The worsening violence and intimidation in Damascus eventually forced the author, too, to give up her beloved house and leave the country. Since September 2012 the building has served as a refuge for her displaced friends.

Darke muses finally on what must happen for Syria to emerge from the current nightmare. She imagines, for example, a second revolution to secure the middle ground. But for this to succeed, she says, everyone must forget that the first revolution began with peaceful protests, and they must forgive regime troops for gunning down unarmed protesters. “Maybe I am a hopeless dreamer”, she concludes. Hopeless or not, she is right in her assessment that a solution to the Syria crisis still resides only in the realm of dreams.” 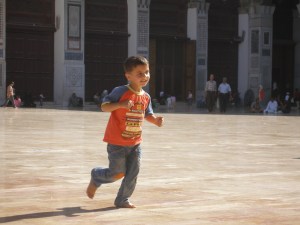