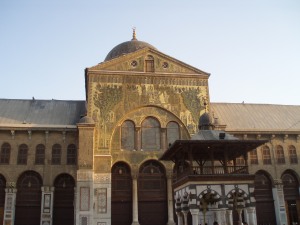 The peaceful mood of the photos above has long since gone in Damascus. For months now the friends living in my house in the Old City have been saying they noticed strange symptoms among themselves of coughing, eye-watering and extreme fatigue. They wondered about chemical weapons but knew no one would believe them if they mentioned anything, so as usual, they kept silent and hoped it would pass.

Now that a huge chemical attack has taken place nearby in the eastern Ghouta, where my caretaker lives, they also know there is no way the regime will permit the UN inspection team to go anywhere near it to investigate. The team will be virtual prisoners in their hotel, unable to go anywhere unless escorted by government minders and then only to places which the regime is content for them to see – in the full knowledge there will be nothing conclusive to find.

To imagine that the UN inspection team will be free to go to where it pleases, is not to understand the regime at all, not to understand its games. Of course the team will be told it is too dangerous to go there, that it cannot go for its own safety, that they, the regime, are responsible for its safety, so are just doing their duty. The excuses will be fulsome and convincingly explained.

The truth is that the UN inspection team, sitting in its hotel in Damascus little over half an hour’s drive away from the site of the chemical weapons attack, is impotent, as is the international community. Once again the Assad regime will run rings round them, laughing privately at how easy it is to retain power when you have a vast security apparatus, held in place by the like of Hizbullah and Iran. They have chemical immunity.

Only Israel may decide the time has come to take action.