In the complex world of Middle Eastern boundary disputes, spare a thought for Banias, ancient City of Pan. Its location in the Golan Heights beside a water source on a strategic crossroads has condemned it to a history of tug and war for over 2000 years.

The settlement was based on the spring at the foot of Mt Hermon on whose summit, according to an Arab proverb, it is winter, on whose shoulders it is autumn, on whose flanks spring blossoms and at whose feet eternal summer reigns. The spring forms the Banias Stream, key tributary of the Jordan River, which then flows into the Sea of Galilee, Israel’s largest reservoir.

First to settle here and worship the divinity of the springs were the Canaanites (Joshua XI, 16-17). Then in 198BC it was the scene of the Battle of Panium between the Macedonian armies of Ptolemaic Egypt and the Seleucid Greeks of Syria whose elephants won the day. To commemorate their victory they built a temple to Pan, goat-footed god of nature and wild things, creator of panic in the enemy. The local name became Paneas, the origin of modern Banias – Arabic has no ‘p’, so uses ‘b’ as the closest sound.

The Romans renamed it Caesarea Philippi (4BC – 43AD), after the son of Herod the Great, and the city was rich in biblical associations.  Here it was that Jesus told Peter he would be the Rock of the Church and be given the keys of the kingdom of Heaven (Matthew XVI, 13-18).

Conflicts continued here between the pagan tradition and Christianity, then between Christians and Muslims. Under the Crusaders the site was known as Belinas and on the hills above, an hour’s walk away, they built the imposing Subeiba Castle, today called Nimrod, which still dominates the pass leading up towards Damascus. A Christian sanctuary dedicated to St George was built above the grotto, whom the Muslims called Al-Khidr (the’green one’) and later converted into a mosque. Today it is maintained by the local Syrian Druze of the Golan. 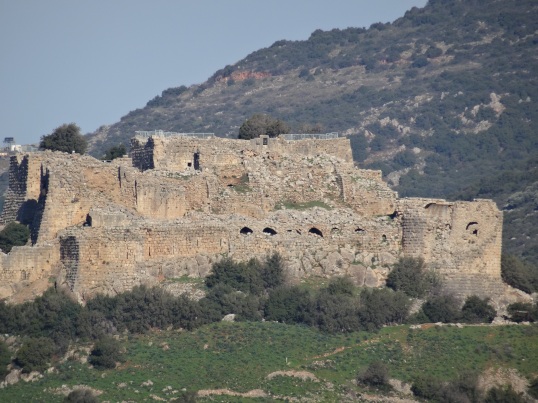 After World War I Banias found itself contested by both the British Mandate over Palestine and the French Mandate over Syria. Britain wanted to retain control of the whole Jordan water system, while France wanted total control of the route linking Damascus and the Golan to Tyre on the Lebanese coast. The case of Banias was among the compromises reached, where Britain agreed for the line to be drawn 750 metres south of the springs so that it fell to the French. The French Mandate came to an end in 1946 and Syria gained its independence as a state within the same borders.

When the state of Israel was created in 1948 without the agreement of  its Arab neighbours, the stage was once again set for conflict. Israel insisted on control of the Jordan headwaters, but Syrian troops refused to withdraw from Banias. Israel began work in 1951 on a channel to drain the nearby Huleh swamps, bulldozing Arab villages that lay in the way, so Syria reinforced its military presence. A swimming area on the stream is still called the ‘Syrian Officers’ Pool.’

Throughout the 1950s and 60s Syrian and Israeli units attacked and counter-attacked, each determined to take control of the vital snowmelt from Mt Hermon. Israel announced a plan to divert the water from the Banias stream into its National Water Carrier, and Syria countered with a plan to build a canal from Banias to Yarmouk. When the heavy machinery moved in to start on the project, Israeli guns destroyed them.

In June 1967 the penultimate day of the Six Day War saw Israeli tanks storm into Banias in breach of a UN ceasefire accepted by Syria hours earlier. Israeli general Moshe Dayan had decided to act unilaterally and take the Golan. The Arab villagers fled to the Syrian Druze village of Majdal Shams higher up the mountain, where they waited. After seven weeks, abandoning hope of return, the villagers dispersed east into Syria.

Israeli bulldozers raised their homes to the ground a few months later, bringing to an end two millenia of life in Banias. Only the mosque, the church and the shrines were spared, along with the Ottoman house of the shaykh perched high atop its Roman foundations. Within days Israeli volunteers began building on the banks of the river, creating Kibbutz Snir, the first Israeli settlement on the Golan. In 1981 Israel annexed the Golan Heights in an illegal move unrecognised by any state but international law remained impotent. No foreign power dared intervene.

Since 2003 Israel’s confidence has increased and the Golan is now covered in scores of settlements, while dozens of hotels offering settler-made ‘Chateau Golan’ serve as weekend getaways for Israeli city elites. A ski resort has been built on Mt Hermon. Tourist websites refer to ‘Israel’s Golan Heights’ and all local maps show it as part of Israel.

As for Banias, now emptied of residents, the site has been incorporated into one of Israel’s many ‘nature reserves’ on the Golan. Four walking trails have been neatly laid out in loops around the ancient city, its springs and its waterfalls. The souvenir shop sells T-shirts emblazoned with ‘Israeli Air Force’ and ‘Mossad’.

Explanatory signs give the Israeli version of history.

The free leaflet that accompanies the entry ticket explains Banias is now  ‘a perfect place to understand the pagan world of the Land of Israel and Phoenicia’. On the map, the basilica has become a synagogue, the Ottoman shaykh’s house has become ‘Corner Tower’ and the Syrian Officers’ Pool is simply ‘Officers’ Pool.’

History in Banias has been rewritten once more. But is this the final version or are there more chapters to come?

(This piece also appeared in Aeon digital magazine as below):