Love and hypocrisy in Iran

In Iran, they say, there are two books in every household  – the Koran and Hafez. One is read, the other is not.

To understand this joke you need do no more than join the millions who regularly throng the tomb of Hafez, 14th century poet of Shiraz and Iran’s national hero, as I did one recent afternoon. 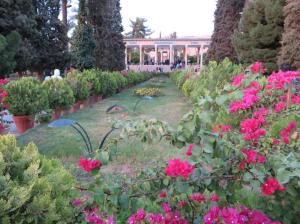 The atmosphere was buzzing, happy and relaxed – Iran at its best.

Day and night the tomb, raised up on a beautifully decorated dais surrounded by its own fragrant rose gardens, water channels and orange trees, is crowded with devotees stroking his alabaster sarcophagus, declaiming his verses, relishing his clever plays on words. 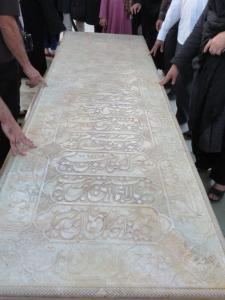 Alabaster sarcophagus of Hafez being stroked in reverence

Hafez represents all the rich complexities of the Iranian identity. His brilliant use of metaphors in their native Farsi language unites them.

But there is another reason the tomb is so popular.

In today’s Islamic Republic it is hard to express resistance to the powers that be.

The ruling clerical elite has consolidated its grip on power. It uses the rhetoric of revolution while crushing opposition. President Rouhani’s smiling face has projected a new image outside the country, but inside everyone tells me things are worse, with more executions  and more oppression than ever before. Penalties are harsh as evidenced by the recent ‘91 lashes’ meted out to defiant women dancing unveiled on a YouTube video to the Pharrell Williams song Happy. A London woman is on hunger strike in an Iranian prison, jailed for attempting to attend a men’s volleyball match.

But dissent can be displayed in subtle ways.  Thanks to Hafez,  Shiraz is Iran’s most liberal city.

Women’s fashion is the give-away, affecting the whole mood of the place. While women are obliged by law to cover themselves from head to toe, in Shiraz the women dress almost outrageously by Islamic standards.

The compulsory headscarf is highly coloured and worn dangling precariously from the back of the head, hardly covering any hair at all; the young sport tight black leggings topped by close-fitting slinky mini-coats, each one daring the next to raise the hemline further.

Far from concealing the feminine curves as the rules dictate, the outfits flaunt them, and the lively groups both young and old, men and women mix freely, laughing and chatting together.

This is Iran at its least compliant, a far cry from the religious conservatism the establishment seeks to impose on its population.

A famous actor arrives to pay his respects and is mobbed Hollywood-style by adoring fans. 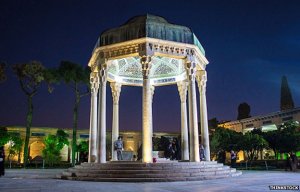 As the sun disappears from the sky and the illuminations come on round the tomb, the atmosphere becomes ever more festive. People start singing and reciting their favourite poems.

Children dangle their feet in the pools, giggling and soaking up their parents’ infectious high spirits.

The scene conceals the paradoxes of Iran, for thanks to the mullahs’ policy of education for all, there are some surprising changes afoot in Iranian society.

For years now, more women than men have been graduating from university. The birth rate has dropped so dramatically, to just one child per family, that the clerics, fearful of a ‘Japanese curve’, have introduced financial incentives for couples to breed more. Most refuse, saying it is still too expensive.

While the West remains obsessed with Iran’s nuclear enrichment, it is an open secret that the well-connected clerics and businessmen enrich themselves through sanctions-busting.

When I hesitate over buying a Persian rug through lack of cash, knowing western credit cards are banned from use inside Iran, the carpet dealer pooh poohs  my concerns and simply rings a friend in Dubai to seal the transaction.

Unfortunately for the mullahs, the mystic poetry of Hafez, besides lauding the joys of love and wine, also targeted religious hypocrisy. 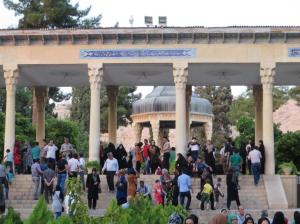 Crowds at the Tomb of Hafez, Shiraz

“Preachers who display their piety in prayer and pulpit, ” he wrote, 600 years ago,

“Behave differently when they’re alone … Why do those who demand repentance do so little of it?”

With prostitution another open secret in clerical circles, especially in the ‘holy cities’, such verses strike a chord.

Bans apply to many things in Iran, including the BBC. Yet the BBC’s Farsi channel is the most watched. Facebook, Twitter, Google Plus and Instagram are all officially blocked. Rouhani is calling for internet restrictions to be eased, but the last word on such matters rests with the Supreme Leader who is so far unrelenting.

Small wonder the people of Iran comfort themselves with the poetry of Hafez. Even the mullahs cannot ban their own national poet.

Diana Darke is author of My House in Damascus: An Inside View of the Syrian Revolution, 2015 edition now available from: 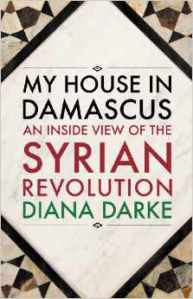 With thanks for kind use of his photos to Richard Stoneman , fellow traveler on my Iran tour arranged by UK tour company Travel the Unknown http://www.traveltheunknown.com/tripfinder/Iran/1/to/21/days/sort-by/country/asc

71 thoughts on “Love and hypocrisy in Iran”